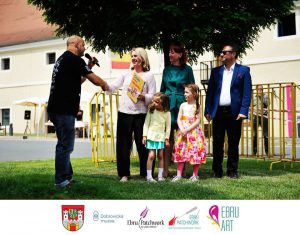 The International Ebru Patchwork Project” is an open effort featuring Ebru artists and enthusiasts from remote corners of the world. Each piece is a thought, a message from each individual artist that together brings a message to the world. The International Ebru-Patchwork Project is a combination of Ebru transfers onto fabric and patchwork quilting. Both of these creative efforts carry the story of generations from long past.

Šárka Duran about the project:
“The idea of the Ebru Patchwork Project came about during the long journey in search of my Turkish family, friends and Masters of Ebru. It was during this journey that I deeply felt the chaotic nature of the world.  These feelings are amplified when you live on the road, and they served as the impetus for the creation of this project.  With the Project, I wanted to create a symbolic connection with the world, and provide a vehicle to deepen the friendship between peoples. Ebru is a very mysterious medium that conveys the beauty and the sense of what I like to think of as a long forgotten time.

The International Ebru Patchwork Project is, for me, a small symbol of my gratitude for all that Ebru has given me, and for all that it gives to people across the world. The Project was first influenced by my first exposure to a true Ebru master.  It was through my first meeting with Mr. Kublai Eralpu Dincer of Istanbul, where I was joined by Xenia Sulimenko. Their enthusiasm and their joy helped me to rid myself of a certain sense of shyness. On October 24, 2015 along with my Ebru partner Xenia Sulimenko, I launched The International Ebru Patchwork Project.

We worked together to gradually define the concept, and the idea and spread through social networks. We created a small package with a short letter describing the project and a couple of pieces of white cotton fabric, each of which was embroidered with the name of the author. In all, we sent 244 letters to 41 countries, totaling about 200 meters of white cloth.

Soon, letters from around the world began to arrive. Each envelope we opened left an indelible mark on me. Each piece carried with it a sense of its creator. In addition, the influence and presence of many of the wonderful people who made this project a reality are tied tightly to the Project.  In particular, I would like to recognize the presence, influence and input from Atilla Can and his wife.  Atilla has influenced my development in Ebru to a great extent and in ways unimaginable. He is in many ways just as responsible for this great success as anyone and his presence at the ceremony of introduction in the Book of Records for the Czech Republic on June 5 2016 was one of the highlights of the effort.

The International Ebru Patchwork Project was an unintentional first step in selecting Prague as the site of the 5th World Ebru Day.  Through the contribution of 196 artists Ebru from 37 countries, we created a patchwork quilt totaling 84.864 square meters. The effort brought Ebru recognition in some small way to people around the world, and will with a little luck, is recognized with an official listing in the Guinness Book of World Records.  This effort combined with a little good fortune, put Prague in a great position to host the annual event, and with Xenia’s help, it became a reality.

The final, fully assembled International Ebru Patchwork Project work will be on display at the 5th World Ebru Day.

Photos from the entry in the Czech Book of Records event can be found here.